LENOIR, N.C. – West Virginia teachers recently voted overwhelmingly to go out on strike if the West Virginia legislature doesn’t get serious about showing teachers – and all working class folk – much more respect. This will be no easy task seeing how both political parties are run by politicians beholden to industrialists in the fossil fuel industry that fight furiously – and generally successfully – against any taxes or fees on their incredibly profitable companies that would help fund the public schools.

… the legislature has successfully fooled the public into believing that the irrelevant, maddening and unending testing proves everything is just fine. Well it is not! Teachers have been robbed of their greatest attribute – creativity.

Listening to teachers would also go a long way to stopping the brain drain from the Mountain State.

The respect requested and required is not just about pay raises and affordable benefits for teachers and their families; it’s about protecting working class families everywhere. It is about supporting the students.

With an intensity in her eyes that I rarely saw, she insisted the teachers not only the right to strike, the had the moral obligation to do so. A classroom teacher for more than 30 years, she told me in no uncertain terms how the lack of support from the legislature affected the classroom. Good teachers were leaving for other states. There was a general malaise. There was also a level of anger, focus and intensity that I rarely saw in Mom, so I knew the problem was real and serious. 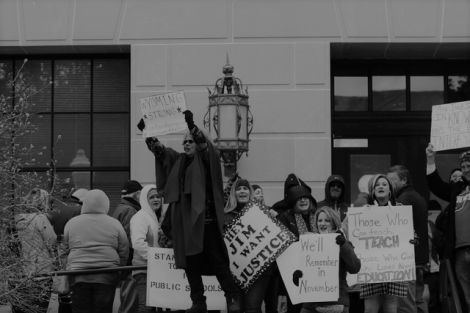 Certainly, the same could be said for today’s North Carolina public school teachers. They are maligned for problems not of their making. From homes sending children to school unprepared to learn (often because of poverty that the legislature refuses to acknowledge or address) to legislators that have not spent one minute attempting to manage and teach 20 or so children, teaches deal with issues that have nothing to do with teaching and more to do with social work and paperwork.

Yet, the public is slow to support public education, especially in Western North Carolina. That’s because the legislature has successfully fooled the public into believing that the irrelevant, maddening and unending testing proves everything is just fine. Well it is not! Teachers have been robbed of their greatest attribute – creativity.

Ask any teacher. They’ll tell you. So, they should have the right to strike if legislators won’t listen to them. Unfortunately, North Carolina law prohibits collective bargaining and strikes by public employees.

As teachers in North Carolina fight for their rights, they should support only candidates for the North Carolina General Assembly that want to reverse these laws. Doing so will show teachers and all working-class folk that, in North Carolina, the working class has an equal voice in their working conditions. And, while school board members don’t have any direct influence on these laws, they certainly can lobby on behalf of educators. So, those seeking those offices should also be on record supporting the right to strike.

The teachers of West Virginia are showing great courage. If, in North Carolina, teachers and other public employees (say in environmental and health agencies, as well as our great universities) had the right to strike, they could not only fight for their own rights, but alert the public to the misplaced priorities in Raleigh.

Finally, as Mom said, this is a moral issue. Teachers and those they serve – our state’s children – deserve the right to have a strong voice in the matters in which they are expert. The right to strike will go a long way to accomplishing that.

© Michael M. Barrick, 2018. Barrick has been a high school and community college teacher, has also served in administrative and policy positions (the Caldwell County Board of Education) and has covered education as a journalist for 25 years.