“Our way of life” requires
a war machine says the president.
He is not the first to say so;
“The Donald” is just more blunt.

Despite the feigned consternation
of the chattering class, this is our history.
A continent conquered through genocide,
the slaughter completed when Chief Sitting Bull was shot down.

An economy sustained by slavery,
its history screams of man’s inhumanity to his own.
Tolerated far too long,
it could be ended only by Civil War carnage.

Industry was built on the backs of laborers
as crony capitalism profited all but the workers.
War was waged on miners in the West Virginia hills
while children in Southern textile mills labored to the bone.

An empire was built
from Cuba to the Philippines.
Puppet dictators were established here and yonder,
while we fought undeclared wars in Southeast Asia.

We have been at war
since our children were – children.
Our granddaughter has yet to live
in a world in which we don’t wage war.

We justify it easily,
even though the boxes we call home
are filled with boxes of stuff.
It is, after all, Our Way of Life.

All “dire threats” to it
will be destroyed.
If in doing so we obliterate ourselves –
it is Our Way of Life. 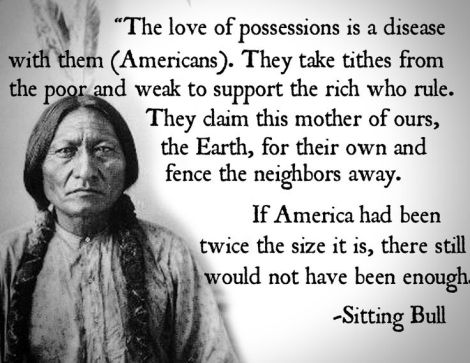